Start clearing your to-be-read lists because my debut novella, IN CROWS’ CLAWS, releases on Amazon on March 1st, 2018!

IN CROWS’ CLAWS is a fantasy novella written in an epistolary (letter) format and set in the fantasy-fiction world of Fyrndell, a place of ancient powers, myriad races, and untold secrets. It is a world where gods may or may not exist, where heroes are few and far between, and where technology progresses at a haphazard pace.

IN CROWS’ CLAWS tells the story of two opposing armies as they race across the continent to a recently-unearthed desert tomb believed to be the final resting place of the goddess Konia. Read the letters sent home from Ahri Vestesson, crowkeeper for the Order of the Orthodox Knights of Fyrndell’s Crusade Army, as he wrestles with matters of faith and purpose while longing to return home to his betrothed. The letters of Marshal Taves Khest, veteran general of the Imperial Expedition Force of the Mhedorian Empire, will demonstrate his duty and ability while he leads his army to and through the desert to claim the glory of capturing the Tomb of Konia in the name of his empress.

But the desert holds many secrets and even more dangers still, for both armies will encounter a brutish and violent warband sworn to the service of Tavradyss, God-Prince of Conflict, and led by the even more vicious Nextiarc.

Previously a web serial, this release of IN CROWS’ CLAWS has been edited and refined and includes more chapters, action, and, of course, heartbreak.

The novella will be available on Amazon as an e-book with a physical release shortly thereafter.

And now, without further adieu, the cover, drawn and composed by my long-time friend and skilled artist Staci Bean: 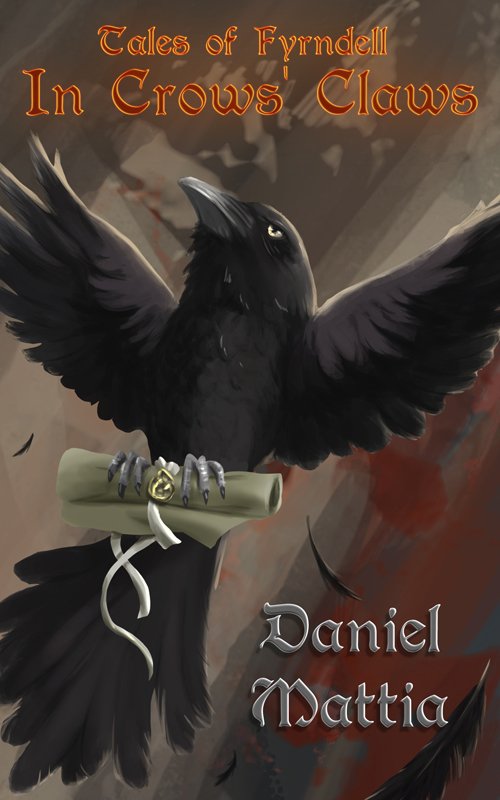 I’m excited to release this for everyone to read! Follow me here or over on Twitter for updates and the link to the Amazon page upon the release of IN CROWS’ CLAWS!