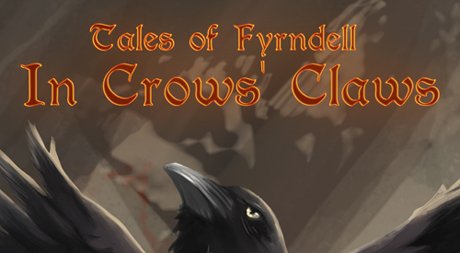 My debut novella, IN CROWS’ CLAWS, is now available as a paperback!

IN CROWS’ CLAWS is an epistolary novella that tells the story of two opposing armies as they race across the continent to a recently-unearthed desert tomb believed to be the final resting place of the goddess Konia. Read the letters sent home from Ahri Vestesson, crowkeeper for the Order of the Orthodox Knights of Fyrndell’s Crusade Army, as he wrestles with matters of faith and purpose while longing to return home to his betrothed. The letters of Marshal Taves Khest, veteran general of the Imperial Expedition Force of the Mhedorian Empire, will demonstrate his duty and ability while he leads his army to and through the desert to claim the glory of capturing the Tomb of Konia in the name of his empress.

But the desert holds many secrets and even more dangers still, for both armies will encounter a brutish and violent warband sworn to the service of Tavradyss, God-Prince of Conflict, and led by the even more vicious Nextiarc.

IN CROWS’ CLAWS is a tale full of action, ambiguous divinity, and heartbreak as three armies converge on the Tomb of Konia, desperate to lay claim to its hidden secrets…

IN CROWS’ CLAWS is enrolled in Amazon MatchBook. Purchasing the paperback edition of IN CROWS’ CLAWS will entitle you to a free copy of the ebook version through the program.

If you have already purchased IN CROWS’ CLAWS as an ebook and would like a paperback copy as well, please email a copy of your receipt/invoice and your address to me at dan[at]danmattia[dot]com. I’ll send the paperback to you free-of-charge as long as you have a proof-of-purchase dated before April 28, 2019 of IN CROWS’ CLAWS.

For those of you who have (surprisingly!) requested signed copies, please pay attention to this site or my Twitter for information on how to purchase a signed copy. Please do not purchase a copy from Amazon if you would like it signed! I’ve shipped a number of copies to me so I can sign them and ship them straight to anyone who would like a signed edition. As soon as I receive these copies, I’ll make an announcement and start selling signed copies.

I’d like to once more thank everyone who’s helped me throughout the writing and publishing process. Writing isn’t the easiest profession and can get downright lonely and frustrating at times, so I’m eternally grateful to everyone who has taken any time to encourage or support me in any way, from critiquing my work to leaving a review or simply congratulating me on the release.

It’s an absolute pleasure to introduce you to the world of Fyrndell, and I hope you enjoy the first of many Tales of Fyrndell.